Listen to the interview (approx. 26 min.) or download it.

Graduated in 2014 with a major in Music Production and Engineering (MP&E).  Principle instrument:  bass guitar.

Position:  Front-End Web Developer at HDMZ, an online marketing/communications agency the builds websites and does online marketing for health and biotech firms.  August’s job is to build the websites for clients, working on an 8-person technical team.

Overview:  Shortly after starting Berklee Luis got heavily involved with the BIRN.  His second year, the BIRN’s web person had graduated, so Luis offered to be their web developer as a work-study position, which he did for two years.  His time was split between building/upgrading the website and learning online how to do so.  During his final year Luis was station manager, so didn’t so much with the web.

When Luis graduated, he moved to San Francisco and wanted to work in sound in the video game industry.  For the next two years, he got a number of temporary contract jobs doing that, initially via networking at a video game developers conference.  However, he grew weary of the highly-variable income and uncertainties associated with contracting, and wanted to steadier job, with being in music no longer a priority.  A friend referred him to a recruiter, who helped him find and land his current job.

Choice Quotes:  “Web development is a very flexible field. I could move anywhere and still do it. It’s also a very easy field to find a job in.”

“When a client signs up with us, we have a designer, a front end developer, and a back end developer work together to build their site.  I’m the front-end developer.”

You definitely have to have the dedication and motivation to learn web development successfully. It can be a rough start at the beginning, much like learning to play the violin. You may not understand why you’re doing certain things, but later on it’ll make sense.  A good way to learn this stuff is to sue online resources.   Code Academy is good; Lynda and Udacity are great too.”

Luis as a Berklee student, at the console.  “I like web development. I enjoy building stuff, That’s why I got into sound design at Berklee–getting into the nitty-gritty, and seeing something I envisioned come into existence.”

Luis remains involved in music production though doing sound for Clockwork 5 Productions, a film and video company he and several friends started together. 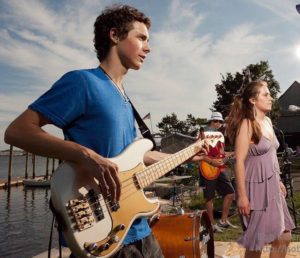 Luis playing with a band.  While music remains part of his life, he cautions, “If you enjoy doing something else besides music, don’t lock yourself into doing music just because you have a music degree. It could turn out a lot better if you go with something else you enjoy rather than struggle while looking for that perfect music job.”

Luis’s parting thoughts:  “Good luck to the new grads out there–I hope everything works out for you!”

Kevin Block-Schwenk is an Associate Professor of Liberal Arts (Economics) at Berklee College of Music in Boston.